May the 24th this year marked 200 years since the birth of Queen Victoria. A milestone definitely worth marking in some way and, fortunately for me, I was also on leave and visiting Oamaru that weekend. And, as we all know from the Victorian Heritage Celebrations held there every November, it is the perfect place to find plenty of people happy to dress historically and celebrate.

I put the question to my friends on Facebook – did anyone know of or was anyone planning some sort of celebration to celebrate her Majesty’s birthday?

Wendy was absolutely amazing and organised for a high tea to be held at the Brydone Hotel on Saturday. Even though, technically, we were celebrating on Saturday, we are half a day ahead of the United Kingdom so only half a day off the 200-year mark. Plus, Saturday just works better for most people since it’s the weekend.

I was staying with Maree and Scott for the weekend and, after a chilled out morning of cat cuddles and coffee, Maree and I got ourselves ready. I had packed The Aubergine, my new cape and faux fur muff since I knew that it was going to be chillier than it usually is when I’m a Victorian in Oamaru. Ha, we ended up with warmer than expected temperatures but I wasn’t going to let that stop me. 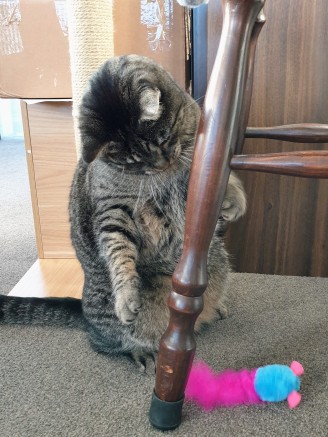 Scott dropped us off in the Historic Precinct and we meandered in the direction of Thames Street. It was such an odd feeling, being dressed up down there when it wasn’t November. And, when there were the only two of us walking about. Locals, however, barely batted an eyelid at the two Victorian ladies going for a stroll.

We had plenty of time to kill and ended up by the supermarket where I’m one of the ladies painted on the wall. We didn’t visit my likeness though because we were there to take photos with the Penguin Books inspired electrical box thingie (yes, I believe that that is the technical term 😏) and I finally got a photo of me wearing my new cape!!!

We arrived at the Brydone shortly before 2pm and found several of our fellow tea-party people assembled inside. Hellos were exchanged, along with compliments in every direction. We then moved into the bar to pay and to await the remaining members of our party.

One of the staff asked if any of the ladies would prefer a ladies chair to make sitting at the table more comfortable. Maree and I both accepted the offer and I am quite glad that I did, finding it not only more comfortable, but also that I was seated at a better level at the table (the joys of being a little vertically challenged – sometimes you feel like a child seated at the table if the seat is too low 😄)

Cheryl arrived just before we were invited through to the dining room, which had our table set out with the teacups and plates, and flowers. A gentleman had taken up residence at the piano earlier and continued to play the whole way through the afternoon and added a whole other level of ambience.

Maree and I were seated across from Diane, the head of the Oamaru Victorian Heritage Celebrations committee, and her daughter Anisha, who is also on the committee so it didn’t take long before our conversation turned towards November.

We chatted about last year’s event and what was currently being planned for this year. I’m really excited about organising the Historical Fashion Show for a second time so we also talked about plans and ideas for that as well.

Needless to say, the afternoon flew by with pleasant company, delicious food, and a teacup toast to the Birthday Girl. Before I knew it the goodbyes and ‘see you in November’s started.

After we left the Brydone Anisha walked with Maree and I back to the Historic Precinct and took a few photos of us before Scott arrived to pick us up.

It felt a bit odd, being in Oamaru, dressed as a Victorian when it wasn’t a November, but I’m really not complaining. It was fantastic to catch up with people I usually only see once a year, and to catch up with some who were unable to make it to Christchurch for Easter in April.

I am so glad that I engineered my annual leave to coincide with Queen Victoria’s birthday. It was definitely worth it and a very enjoyable afternoon out. Thank you so much to Wendy for organising it and to Maree and Scott for letting me stay the weekend so it was possible for me to join in.

The second row of pleats on my Tissot Striped Skirt have been attached! Just one more row to go before I have to stop procrastinating and start making the bias and straight grain trims...
The first row of pleats has been made an attached! One small step closer to making the striped Tissot Dress seen in Still On Top (@aucklandartgallery), and other Tissot paintings. I'm making this with a striped cotton shirting from @wearethefabricstore and Truly Victorian patterns 😊
The more I study this dress in the various paintings, the more I see. The underskirt is absolutely fascinating when you break it down:
It has begun! My Big Project for 2021 is based on the amazing dress from Tissot's Still On Top painting, held by @aucklandartgallery