In April this year, The Coach House Museum put on a Skills and Trades of Yesteryear Open Day. This sounded like a fun day out as I hadn’t visited the museum and they were inviting people to dress in period dress (bribing them by holding a best-dressed competition).

I already had a couple of dresses that I could have worn but I decided to make a new bodice. Unfortunately, I always underestimate the time it takes me to sew something and overestimate my skill level, and I was sewing right up until we were supposed to be leaving. I could have worn something else but I was so close to finishing it would have felt like a defeat to give up. I’m a terribly stubborn person and when I put my mind to something then I will do it. I hate being late anywhere (I’m that person who will arrive at least ten minutes early to everything) but because I was so determined to finish that day we were. Because of the buttons. I’m surprised I didn’t stab myself with the needle as I rushed to secure them all.

We didn’t miss anything though, demonstrations were being repeated throughout the day and the best-dressed competition was in the afternoon. There was plenty of time to explore the museum and marvel at the amazing collection of gigs, phaetons, wagons, and so forth. 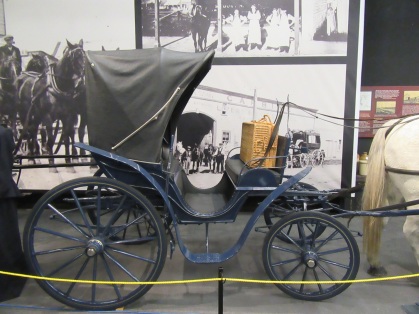 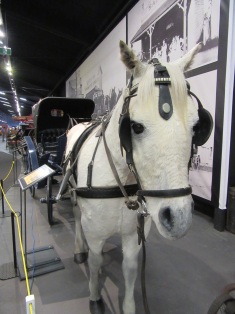 One thing that I must commend the museum on is their idea to have a few mannequins scattered about the place but, to be honest, I was disappointed about the clothing choices. I think that they could have chosen more historically accurate attire. It would make them more appealing and add so much more to a visitor’s overall enjoyment of the displays.

But, regardless, this was a carriage that I could sit in so I climbed up and sat down.

See that little box next to me? That’s a button and curious, I pressed it, thinking that something might play on the screen but I had no idea what – maybe some pictures of carriages? A little documentary? Better yet, as the screen came to life I saw that I was about to go for a virtual drive about the town. And not only that, the carriage actually moved as if I really was out on the road!

Taking a virtual drive about Feilding

What I was seeing

After that, we finished looking about inside and ventured out into the sunshine to see what was going on out there. Liane met up with a couple of people she knew and I wandered off to make a friend of my own:

Liane came back with her friends and we continued to look about the place, finding this coach to climb in…

With Liane in the coach

…Before heading back inside for the best dressed competition which Liane won (she often does but that’s not a surprise – she often wins and totally deserves to). By then, we were starting to feel like it was getting close to leaving time as we had almost exhausted all our options of things to do.

There was only one big thing left to do – something I had been wanting to do ever since we arrived – and that was to take a real drive in a phaeton with a real horse. The same horse, we found out when talking to his human, that was used for the filming of the virtual drive! That was pretty neat.

Both these photos came from Liane’s phone:

It was such a fun ride, and a perfect end to the day.

One thought on “The Coach House”