After (nearly) experiencing costume burnout while making my Bastille Dress the last thing that I felt like doing this year was taking on another ‘big’ project. I certainly did not want to make anymore trim for several months!

Back in March I picked up some half price taffeta in plum and eggplant, with plans of making an 1870s or 1880s dress. But each of these decades posed a problem. I don’t really need another 1880s bustle dress and if I were to make an early bustle dress or venture into Natural Form territory I would need new undergarments.

As I was trying to figure this all out the fabric starting calling out to become an 1890s dress. At first I ignored it but it didn’t take long before I caved. After all, I did sort of want to make a new 1893 dress since this year is the 125th year of women being able to vote here in New Zealand.

I already had the undergarments and the dress would only consist of two pieces so that seemed easy enough. Easy compared to everything that I had to do for the Bastille Dress anyway.

I started with the skirt first, using the Truly Victorian pattern – the same that I used for my Antique Rose ensemble. Being familiar with a pattern always helps, so it went together in only a few days. Because I planned to trim the bodice in some way I left the skirt untrimmed.

I cut out the pieces in broadcloth first so that I could flatline the taffeta and ensure that the taffeta had the properties that I was after. When I had flatlined all the pieces I assembled them together. 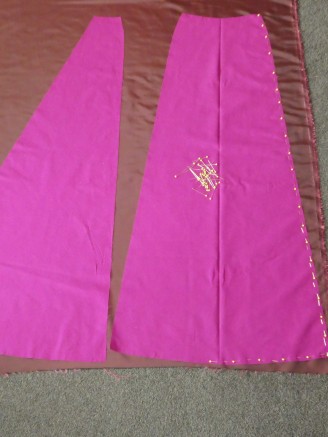 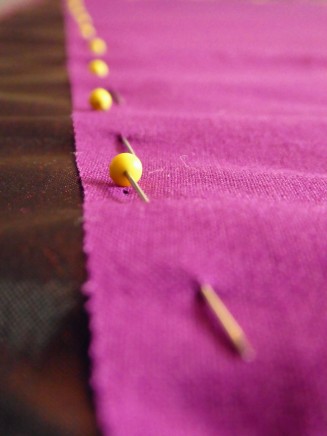 For the hem facing I used cotton organdy and flatlined that with the taffeta before hand stitching it carefully to the broadcloth so that the stitches wouldn’t be visible on the outside. Then after that I added the waistband, hooks and bars, and then it was done.

Getting ready to flatline the hem facing 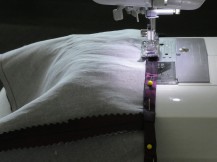 Hemming the top of the facing

Now that the easy part is out of the way my focus has moved towards the two bodices I’m planning (yes, I said two!), as well as working away during stolen minutes to stitch tiny beads onto the cape that will also become part of my ensemble. Not only that but I’m working on a new corset (in a delectable butterscotch colour) that needs to be completed before I can start on the bodices.

I’m also now going to be making an outfit for my dear Mama, as she has volunteered herself to be costumed for the Heritage Celebrations in Oamaru this year. Fortunately, that means that the other taffetta I picked up in March now has a purpose, and it means that it’s going to be my first venture into sewing for someone else. Fingers crossed that it’s all going to work!

And, if that’s not enough to keep me out of trouble, I’m also knee deep in research and working on the Historical Fashion Show for the Heritage Celebrations and about to get busier with that too. Phew!

3 thoughts on “The Aubergine Part 1”

New blog post about my Striped Tissot Overskirt is up - link in my bio 😊
The Tissot Striped Overskirt is finished!!!
The bias trim has been attached and the lower back has now been bustled up. I only have the straight grain trim to go and then the overskirt will be finished 😊
The pleats have been attached to the overskirt. I'm thinking I will go ahead and bustle up the lower section more now that I see how it's sitting now