My flight landed a few minutes late and, as always, it took some time to depart the plane and collect my suitcase. I kept an eye out for Liane, in case she had already collected hers from her flight and had wandered down, but my suitcase arrived first. Knowing the airport almost as well as the back of my hand, I headed down to the regional terminal, hoping to be able to sneak up on Liane while she was looking for her suitcase. But…no Liane.

And no other passengers either. It turns out that my flight hadn’t been the only one running a few minutes late. Eventually Liane came through the gate and we hugged and started chattering about how excited we were now that our adventure had begun and she told me the tale about how she had had to remove an outfit from her suitcase because it was overweight (a friend had dropped her at her airport and was able to hold onto it for her). Once Liane collected her suitcase we caught a shuttle to our motel.

Being just up the road from Riccarton Mall, we headed there for hairspray and dry shampoo (I’m terrified of flying with aerosol containers), as well as looking in Lovisa where I bought matching Christmas earrings for myself and my mum.

Back at our motel unit, I pulled out my skirts and overskirts and began the much-procrastinated task of sewing hooks and bars onto the waistbands while Liane caught me up on what she’d been up to. We tried to catch an early(ish) night but that never happens so I don’t even remember the time that we went to bed.

In the morning, we double checked that we had repacked everything that we had pulled out of our suitcases and carry on bags, dressed, grabbed a bite of breakfast, and then dashed out the door to reach the bus stop in time. We did, fortunately, and then had a few minutes to wait before it pulled up. The driver checked us in and we climbed aboard. We ended up sitting right at the back where there were still two free seats next to each other and settled in for our three and a bit hour journey.

I’ve done that trip numerous times but usually with a good book and music for company. Sharing the trip with Liane made the time fly by and before we knew it… we had arrived. We collected our suitcases and headed off down Thames Stree to our accommodation (or, as Liane calls it, our ‘home away from home’). After checking in and unpacking more than we needed to so that our room quickly looked disorderly, Liane dragged me to a second-hand store for a look. Once I managed to tear her away from there, it was time for the real fun to begin.

We dressed in our Victorian attire and wandered down to the Historic Precinct to stroll about while waiting for the Grand Opening to start. We were treated to a complimentary glass of wine, live music, welcoming and opening speeches, and caught up with friends we had not seen since the previous year. I started talking to a couple of new ladies and found out that they had come down from Auckland as well. Tracey told me that she and her friend Claire had accidentally discovered the Heritage Celebrations while searching for historical costuming ideas and decided to come down and check it out. Tracey’s daughter Katherine also came and had made her own dress (which blew me away because I couldn’t even sew a straight line back in high school).

As the opening came to a close and people started dissipating, Liane and I were hungry and in need of food. Having not yet made it to the supermarket we headed down there and ‘visited’ our painted doubles on the wall outside. Inside, while still dressed in our Victorian dresses, we walked around looking for food to purchase for the next few days. Before going inside the supermarket I wondered to Liane if anyone would actually ask to take our photo while shopping. We actually were!

The evening’s entertainment had been cancelled due to unforeseen circumstances so we had the rest of Thursday to amuse ourselves and sort out our outfits for the following days.

On Friday morning we breakfasted and got dressed, ready to attend the dance practice for that evening’s ball. While there we ran into some friends and caught up as well as tried to remember the dances taught the years’ previous and relearn them. After trying to commit them to memory for an hour and a half I left, hoping I would still remember what I’d learned several hours later, to meet up with Maree.

As I was walking down to meet her a car pulled over and the side window opened. I glanced over to see why someone was stopping and realised that it was my parents! They’d been house hunting and recognised me while driving past. They hadn’t seen my Shippensburg dress in person before and Mum wanted a quick 360 degree look so I gave her a spin. They said that they were heading back to their motel but would come back in time for the group photo.

They drove off and I went into the Opera House for a coffee while waiting for Maree. The ladies at the bar were dressed as nurses as the year’s theme was Medical. They were so sweet and told me that I looked lovely and that they felt underdressed but I thought that they look great.

Coffee in hand, I headed back outside and spotted Maree further down the street so hurried down to greet her and we started catching up while other people starting to wander towards the Opera House in anticipation of the group photo. We were soon joined by our other friends and new acquaintances. And Mum and Dad returned so Dad could play photographer with my camera as we assembled for the group photograph. 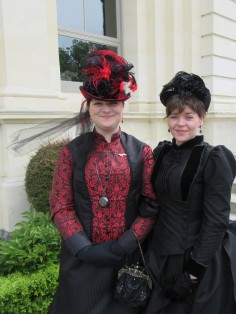 Everyone slowly taking their places

The group photograph on the Opera House steps is always fun, and always an interesting experience. Locals and tourists gather in the middle of Thames Street to photograph the costumed Victorians. The road isn’t closed off so people still drive past, sometimes interrupting the shots being composed by the photographers and the looks that we get from passengers and drivers are either ones of complete bewilderment, appreciation, amusement, or of ‘here they go again…’

Unfortunately, because the weather had been terrible a few days earlier and the grounds of the Botanic Gardens were too soft and muddy, the Garden Party became the Garden-less Party inside one of the churches. It wasn’t as much fun without the picturesque surroundings and attendance was down a bit. Liane and I decided to visit the Gardens afterwards to make up for it and to take some photos. 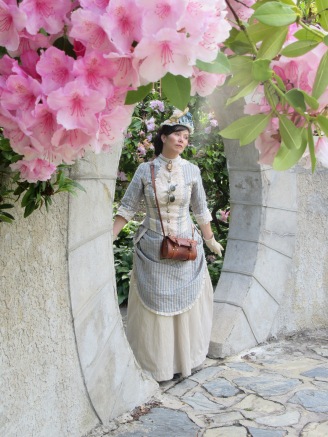 Making use of the archway into the Peter Pan garden

We had a couple of hours of down time before the process of getting ready for the ball began. I redressed my hair and reapplied my makeup before putting my Black and Rose ball dress on for the first time. Yes, I literally mean the first time. Because I had been sick before coming down I hadn’t thought to have a dress rehearsal with my bodice and discovered that my chemise was visible at the shoulders.

Trying not to panic, I reached for my emergency event kit and ended up sewing my chemise to my bodice to keep it in place. While I was wearing them. And making a mental note that ‘next year I should make a black chemise…’ Once that was done, it was time to head down to the Scottish Hall to attend the ball.

It was a lovely and enjoyable evening and while I didn’t do much dancing (there is always an unevenness between the numbers of ladies and gentlemen attending), I was seated at the best table. Some may have called the table the loudest, or the most animated (I was definitely the quietest and most reserved), but we all enjoyed each others’ company and conversation.

I think that by the time we got back to our room and into a state which we could fall into our beds it was after 1am. A time which I am definitely not used to seeing at all. It didn’t take too long after my head hit the pillow to fall fast asleep, too tired to even dream of the beautiful dresses and the dancing.