It didn’t take us long to find just what on earth was going on as we soon happened upon the skirmish between the Armed Constabulary and bushrangers. We watched as each side took shots at each other across the water and as the Constabulary gained ground. Of the three bushrangers, one wasn’t so fortunate, one got arrested, and the other magically vanished into thin air. 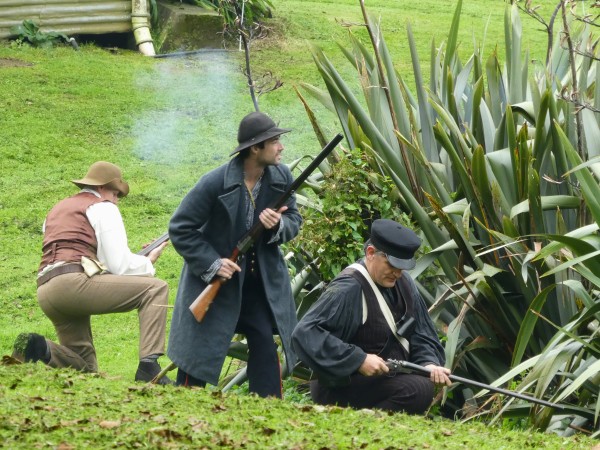 After all of that excitement, Liane and I decided we were in need of a nice cup of tea and walked around to the homestead. Volunteers had set up a table with scones, sandwiches, and biscuits that they were selling along with cups of tea and coffee. Liane and I both selected a scone and placed an order for tea before heading outside and sitting at one of the picnic tables.

Our cups of tea were brought out and as we were sitting there I suddenly heard ‘Miss Temby! Miss Temby!’ and looked up to see Linda, one of my blog/facebook followers making her way over with her family in tow. We said hello and chatted for a bit before  Jason and another of the reenactors turned up and Jason ran the idea of a mock kidnapping attempt past us – unanimous pointing of fingers at me. Shortly after the idea was scrapped as they decided to repeat the morning’s display. I don’t know if I was relieved or a little disappointed as I had just got my head around doing it.

Pretty soon it was time to head over to the other side of the village to assemble for the Procession of Participants that had been organised for the day. Liane and I took our spot behind the Armed Constabulary along with the bookbinder who had offered to ‘escort’ us. The tank was directly behind us and I can tell you that having one of those at your back is a definite incentive not to dawdle.

Leading the procession was a pipe band and as we followed behind I couldn’t help think of the Grand Parade during the Victorian Heritage Celebrations in Oamaru. Only, this was smaller, walking on gravel, there was a tank behind us, and I wasn’t protesting for women’s right to vote. For the first part of the procession there weren’t many spectators but once we drew closer to the main part of the village both sides of the street were filled with people.

After passing through the main part of the village the procession halted and each group broke off (in a rather orderly fashion obviously, given the military connections). Liane and I negotiated the steep hill and crossed the bridge over the lake. It was definitely time to pay Deidre a visit and have our photos taken.

In October we had our picture taken together but this time around we opted to have individual portraits taken and I went first. Deidre asked me if I wanted to sit or stand and I couldn’t decide so Deidre said that we’d try both. A good thing too since, to my surprise, I like the seated portrait better and I really thought that I wouldn’t.

Once Deidre had finished with Liane she turned to her friend, ‘can you go up the hill and round up two or three of the roughest looking men?’ she asked, clearly up to something. Her friend disappeared for a while and returned empty handed. She had asked and apparently, there had been a couple of volunteers. We waited for a while and then the entire Armed Constabulary turned up.

Deidre had a field day ordering the constabulary into the studio space and trying to fit everyone in. She positioned Liane and I in front of them and us the direction of looking meek and mild or scared before telling the men to look at us rather menacingly. I never looked over my shoulder to see exactly how menacingly those looks were – if I had I would have looked much more terrified!

‘Right,’ Deidre said, once satisfied that she had the shot. ‘Now give the ladies a gun.’

Definitely not something I was expecting and the next thing I knew, as she was shooing most of the men out of the studio space, I was handed a musket complete with bayonet. Upright, it was taller than me, and it was definitely heavier than I thought. Holding it I was quite concerned that I was going to accidentally injure someone by accidentally poking them or something.

Liane, on the other hand, was armed with a pistol. Deidre directed the two weaponless constables to huddle together while Liane and I stood behind them. I did my best to look confident or tough although, in reality, I was looking forward to handing the weapon back! I wouldn’t exactly say that I’m a great actress but I think that I actually managed to look reasonably tough at least.

By then Liane and I decided that we were suitable hungry for a late lunch and headed up to the Shakee Pear. It was nice to have a chance to sit down for a while and to take a bit of a timeout before re-immersing ourselves back in the past.

We returned in time to watch the Armed Constabulary giving a drilling display ahead of the second reenactment which played out in a similar manner to the morning’s display. It was quite interesting to watch a second time since we knew how it was to play out and it was also possible to focus on different reenactors. 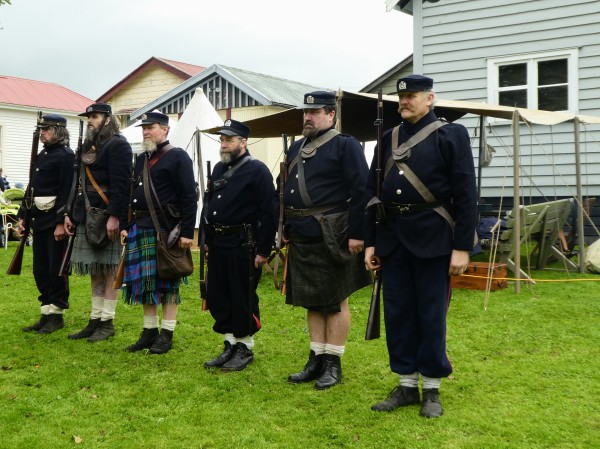 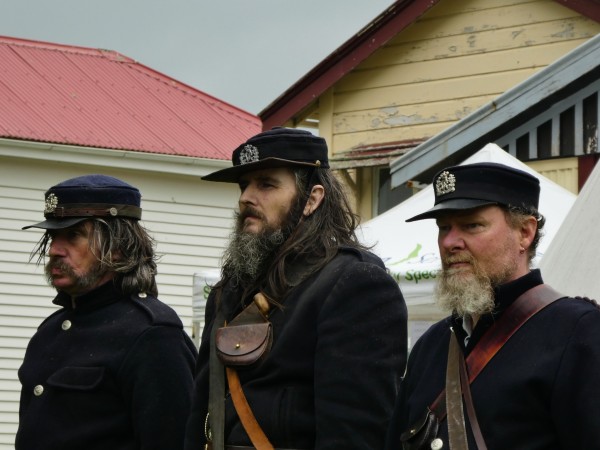 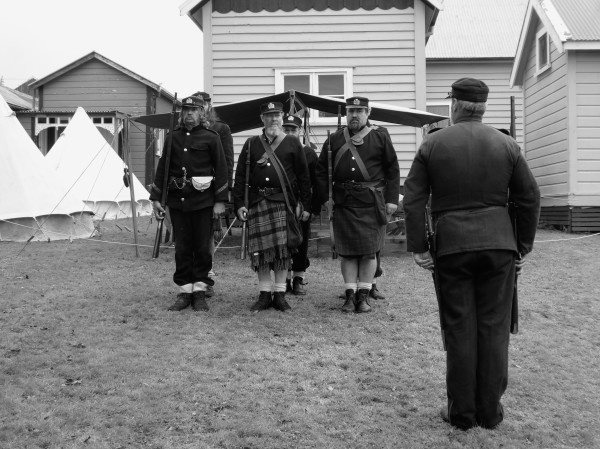 Liane and I ended up walking with the bushrangers back towards the village and talking to Conal, who also happens to be one of the IT guys at my work (small world!). The conversation turned towards mourning etiquette in the Victorian era, which didn’t strike me as too odd since my Shippensburg dress, being black, often gets mistaken for mourning dress.

Parting ways with the bushrangers Liane and I realised that we hadn’t yet taken a ride on the train and since we had been sent tickets for that as well as our admission into the village it would have been rude not to make use of them. Fortunately, our timing was almost perfect as the train was depositing passengers by the time we reached the stop. Our tickets were punched and we climbed into one of the little carriages.

By the time we’d completed two circuits of the village and disembarked, we could see that the slow packing up process had begun. Liane and I stood on the veranda of the homestead and watched as the tank and other military vehicles began their slow convoy – taking one last turn around the village. We then wandered back down towards the barbershop to watch them pass by before heading out the gate.

Liane sighed and said that we should probably be heading off soon as well and I told her that I was leaving whenever she was because I wouldn’t get a ride if I tried to hitchhike back. I was quickly assured by others who standing with us that I would get a ride in an instant. I may have joked about flashing my ankles. Though, with the weather threatening rain (which had, luckily, held off for the day) and with a definite feeling of the day drawing to a close I was ready to start heading for home.

We said our goodbyes and headed for the entrance/exit. Not that we left straight away as we both ended up talking to Denise and other volunteers inside. They thanked us again for coming and again we said thank you so much for inviting us. We chatted a bit about coming back in October before saying our final goodbyes before departing.

On the drive home, we agreed that it had been a great day and we were so glad that we had come along. It was absolutely lovely to have been invited along, to be so warmly welcomed back by so many of the volunteers we had met last October, and, of course, to have met the Armed Constabulary reenactors – hopefully, we’ll get to run into them again soon.

I love my print of Still On Top from @aucklandartgallery! To be able to wale up and see this every day will be so motivating for me to keep working on my Tissot Dress ☺
She's done!! The underskirt for the Striped Tissot Dress is complete! I am so happy with how this has turned out - hopefully the overksirt and the bodice work out just as well 😊
The bias trim is attached! Just the straight grain trim to go and then this skirt is done 😊
The bias trim is made and ready to attach!